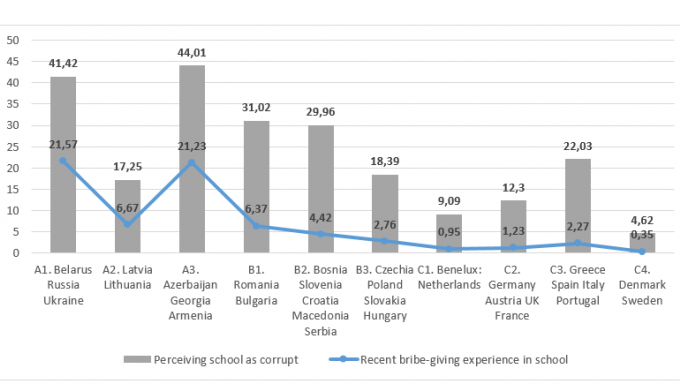 Numerous reports prepared by international organizations bring to light the remarkable variation of corruption levels between countries. There are countries where corrupt negotiations with public officials have been - and still are - the necessary conditions to get public services, while in others corruption is a rare event and most citizens never experience it. Despite a growing number of data and research, it is still unclear how to unravel this persistent puzzle of cross-national corruption differences. Sector-specific analyses are also scarce.

The main focus of my dissertation project was the underlying causes of corrupt practices - such as bribe-giving and unofficial payments - and perceived levels of corruption in education sectors across Europe. The objective of this study was to account for both ‘macro’ characteristics of educational systems between countries, as well as for ‘micro’ cultural and social characteristics of individuals. The causes of corruption in the education sector across Europe are assessed using a multi-level analytical framework with harmonized corruption indicators. Survey data harmonization is the procedure that makes it possible to combine different sources into an integrated dataset with comparable indicators (more on dataharmonization.org).

For the purpose of the analysis, an integrated dataset was created, which consists of the harmonized micro-level data gathered from the Life in Transition Survey, the Global Corruption Barometer and the Quality of Government survey -a total of 96 national surveys conducted in 30 European countries in 2010 among a total of 31,578 respondents who declared having recent contact with education institutions; and the integrated macro-level data of country-level indicators and education system characteristics from the World Bank Education Statistics, the Varieties of Democracy, the Quality of Government Standard Dataset and UNESCO Institute of Statistics Education Indicators.

As a part of the project, an overview of existing cross-national citizen survey data was prepared, which examined occurrences of corruption in Europe (1989-2013). This was published and is freely available on the Harvard Dataverse. Education specific information is summarized on the ETICO Statistics page.

The multi-level analysis with harmonized indicators show a strong negative correlation between education staff compensation and the likelihood of bribe-giving in a country’s public schools – the higher the percentage of the budget assigned to staff compensation in the education sector, the lower the likelihood of experienced corruption in schools in these countries. However, standardization and efficiency indicators for education systems, based on centralized exit examinations and teacher-student ratios, do not reach statistical significance after controlling for a country’s economic development. There is also only a weak direct correlation between government expenditure on education and the likelihood of bribe-giving in schools. What is interesting is that the effect of government expenditure and pupil-teacher ratio become statistically significant when it comes to citizen’s perceptions of corruption in the education sector.

The likelihood of corruption in public schools is strongly associated with country-level economic development, measured by GDP per capita. However, this study proved that economic factors make up only one of the key domains which can influence corruption levels. Another key predictor of corruption is a country’s level of inequality (Gini index) and its political regime (Indexes of the Varieties of Democracy Project). All in all, European countries with higher economic development, lower levels of societal inequality, and liberal principles of democracy have lower levels of corruption in public schools. Specifically, fewer respondents in those countries are likely to state that they have recently given bribes or made informal payments in public schools.

In addition to the above, the analysis supports previous findings that respondents from urban and metropolitan areas are more likely to give bribes or unofficial payments in public sector institutions than those living in rural areas. Also, the likelihood of having the bribe-giving experience in the education sector decreases with age – this is a consistent trend in nine out of ten country subgroups in Europe, with the Baltic countries being an exception. In most of the country group models, gender is not significant in predicting instances of bribe-giving or informal payments, with the exception of a weak yet significant statistical difference in Caucasus countries, where males are more likely to participate in such corrupt practices. The effect of individual education levels seems to be more mixed. In the post-soviet country group, people with tertiary education levels are more likely to declare giving bribes than people with lower levels of education, in the post-socialist country group education does not seem to be a significant factor, while in the Western country group lower education levels increase the likelihood of participating in corrupt practices in the education sector.

* Ilona Wysmułek is a research assistant for the Research Group on Comparative Analysis of Social Inequality and a PhD candidate in sociology at the Polish Academy of Sciences in Warsaw. Her dissertation research on sources of corruption in public schools across Europe is supported by the Ministry of Science and Higher Education of Poland which is funding a half-year visiting fellowship at The Ohio State University (the Mershon Center) and the University of Chicago (National Opinion Research Center).