Awareness-raising about the threat to education through contract cheating 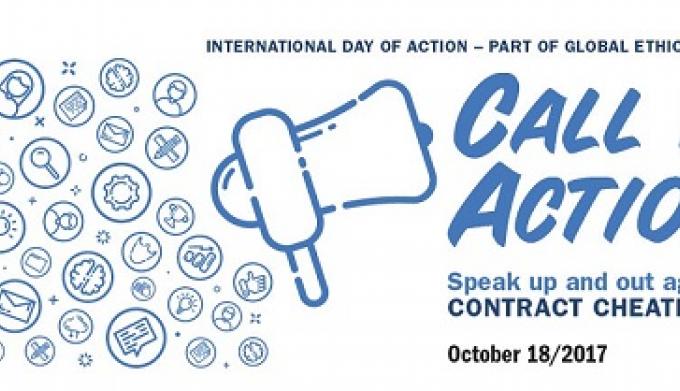 There will always be students who cheat for different reasons, but recent news, media reports and research suggest that in some countries it is common for teachers to condone or even encourage student cheating, typically by demanding or accepting bribes or by ignoring clear breaches to normal academic practice (for example: Abd El Galail 2015, BBC News 2015, Besser & Cronau 2015, Foltýnek et al 2017, Mazodier et al 2012, Mohamedbhai 2016, Poisson 2017). Any progress towards overturning such conduct would be a major achievement, particularly in places where income from bribery supplements very meagre wages.

However, when tackling global corruption it is sensible to start small, focusing on one issue, then build on that success. Here is an invitation for individuals, or entire academic communities, to become involved and play their part in changing from a focus on cheating and corruption towards a culture of academic integrity.

One of the most serious forms of student cheating is when a student asks a third party to complete assessed work on their behalf. It is serious because a student engaging in this type of behaviour is deliberately setting out to gain credit for work this is not their own, undermining the value of their qualification and bypassing the learning and evaluation processes. Various names have been given to such conduct, such as ghost-writing and outsourcing, particularly when asking friends and family to help complete work, but, following Clarke and Lancaster’s research about more organised and systematic ghost-writing services (Clarke & Lancaster 2006, Lancaster & Clarke 2014, 2016, 2017), contract cheating has been increasingly adopted as an umbrella term for different types of inappropriate outsourcing behaviour.

Although small-scale informal contract cheating still continues, in recent years a huge industry has arisen with many companies globally providing such services for payment. They were sometimes known as essay-mills, but now they offer a much broader range of services, including impersonation to sit exams and even full PhD thesis completion. This is big business and very lucrative for the companies and those people contracted to complete the work (who may be academics, graduates or current students). These companies appear very legitimate and in most countries are not illegal. The services are promoted through national advertising, websites and social media, but also through physical presence (leafleting, posters) on college and university campuses throughout the world. It is no accident that students can be misled into believing that they are part of the institution’s student support services.

Although a recent research trial suggested that experienced markers can identify some ghost-written work (Dawson & Sutherland-Smith 2017), finding evidence can be problematic. The work produced is usually original or carefully disguised plagiarism, created especially for the student, with which (anti-plagiarism) text-matching software finds no problems. It is impossible to know how much contract cheating goes undetected or is deliberately ignored by examiners, but the vast global scale of the industry that has developed to meet the demands for such services, suggests the use of these companies is becoming increasingly common throughout the world.

Recent research in Australia (Bretag et al 2017) suggests that many students under-estimate the seriousness of using such services, both in terms of diminishing their learning potential and also in terms of the consequences to them if the cheating is discovered – many students do not realise that, under typical Australian and UK institutional sanctions, if caught they are likely to be suspended or expelled. The belief by some students that students who outsource their work to other people get higher marks (Glendinning et al 2017), detection is unlikely, it is a common practice by other students and not really such a big deal if they are caught cheating, may mislead otherwise honest students to engage in contract cheating to ensure they are not disadvantaged.

Clearly, contract cheating raises serious threats to the security, reliability and standards of academic qualifications in all parts of the world. Those of us who care about quality and standards in education cannot remain complacent in the face of this challenge, but where can we start?

One thing we can all do is to help to raise awareness in the whole academic community, not just among students, that this behaviour is very wrong and cannot be condoned. Awareness-raising is more effective if we can send the message in a way that is fun and inclusive. With this in mind in October 2016, the International Center for Academic Integrity (ICAI) held an International Day of Action against Contract Cheating, coinciding with the Carnegie Council’s Global Day of Ethics. Social media was used for people to communicate during the day in different parts of the world, resulting in excess of 20,000 social media posts and 35,000 impressions.

In view of last year’s success, ICAI has decided to repeat the day of action again this year. Therefore Wednesday 18th October 2017 is designated as the Second International Day of Action against Contract Cheating. The focus is mainly on student participation, but we hope that many more people in universities, colleges and schools throughout the world will take part this year and make this an even greater success. Please help to spread the word while there is time to plan exciting activities on campus in time for the October event.

Lancaster, T. and Clarke, R. (2017). Rethinking Assessment by Examination in the Age of Contract Cheating. Plagiarism Across Europe and Beyond 2017. Brno, Czech Republic.