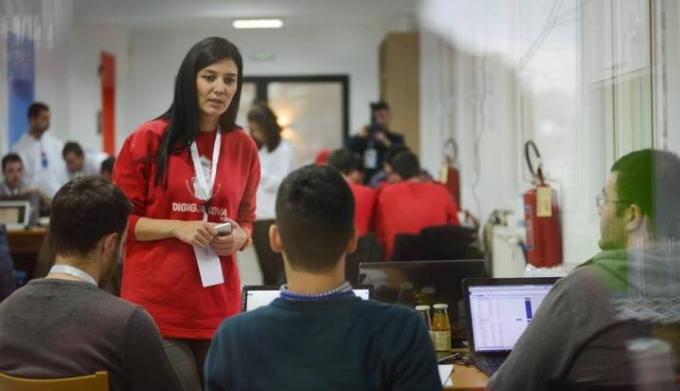 Until lately efforts to fight corruption, both in practice and literature, were merely based on the myths of the top-down approach, a misconception that the citizens cannot make a difference if there is no institutional support. Interventions were focused on convincing institutions to give citizens space to have their voices heard. Instead, we have failed to acknowledge that citizen engagement and action thrive also in countries where there is repression and no freedom of speech. Today, there are various good examples from around the world that have made a difference from which we can learn from and adapt to our local contexts.

Kosovo faces widespread endemic corruption that has become a social norm. An anti-corruption initiative was imminent to challenge the shared understanding that corruption should be an accepted form of behavior. At United Nations Development Programme (UNDP) we began our anti-corruption efforts with very ambitious goals. Our main challenge was to address the ever-increasing social apathy, whereby citizens have low or no trust in public institutions, are reluctant to participate in public hearings as their voice will not be taken into account, and the fear of retaliation in case they decide to report a case of corruption.

Jointly with the anti-corruption teams across Eastern Europe and Central Asia
region, we’ve been working with institutions, civil society, and citizens to address corruption from prevention to the actual fight.

What have we learned from our work in Kosovo?

There are no quick fixes when it comes to corruption. Projects in (the area of) anti-corruption are processes that take time to be able to refer to tangible results. They are about processes of reform that should have an impact on peoples’ behaviour that normally take time to change. There has been progress in the fight against corruption globally in terms of advocacy and awareness, frameworks, legal tools, technology, and enhanced anti-corruption strategies. In spite of these efforts, various studies on perceptions (i.e. TI’s Corruption Perception Index of corruption show that the prevalence of corruption still remains significant in many countries).

The importance of getting the relevant authorities on board: our interventions were designed to work with both the supply and the demand side. Bringing all relevant stakeholders around the table was crucial. This necessitated the training and awareness-raising of public sector officials in corruption and demonstration of clear benefits that anti-corruption can bring to their respective institutions. These efforts were further strengthened by collaboration between the government and civil society organizations.

Ensuring the political will. There is a perception that there is a lack of political will to fight corruption. In addition, due to the political influence in the justice institutions, cases of prosecution of corruption remain low and impunity remains a problem. However, we were able to target the key drivers of change to obtain buy-in for its activities from high ranking officials of the government at all levels. From the inception phase of identifying the corruption risks within the local institutions to developing the anti-corruption plan to address risks, heads of institutions have lead the process to ensure ownership and sustainability of such an important effort.

Trust and social infrastructure come before technology. Enhancing transparency and accountability requires a deep change in society and decision-makers. Technology, if used effectively, is only an enabling tool, but not a driving force. Without the trust of citizens, anti-corruption initiatives will not work out. Working with strong and reliable partners has been important and has ensured active stakeholder participation in project meetings and consultations.

There needs to be a gender-based approach to tackling corruption. UNDP assessment on the impact of corruption on women and men proved that corruption is not gender-neutral. Women´s experience with corruption is different, in particular when accessing services. Therefore, what we need is more gender-aware anti-corruption initiatives. In addition, there is a need to implement policies that will increase women’s awareness of their rights and enhance their ability to undertake collective action to address corruption.

Strengthen civil society to fight corruption through social media: the Kallxo case. The www.Kallxo.com online platform to report corruption, which is implemented by a consortium of civil society representatives and the media, has truly benefited from the diverse skills of its partners. Through tech solutions, investigative journalism, conducting perception surveys, and publishing articles based on reported cases, the platform has been equipped with the ingredients essential in tackling an issue as complex and multi-faceted as corruption. The platform is unique in that it transforms data into knowledge to encourage civic action and engagement.

Communication is key. In Kosovo, we have conducted a series of highly visible awareness-raising and social mobilization campaigns. In an environment where corruption is visible at all layers of society, and where corrupt officials are not being held accountable, citizens become more and more skeptical about how much they can actually contribute to creating change. Implementing a programme of this nature that is dependent on the participation and contribution from citizens, requires intensive communication to maintain the citizen’s interest, commitment and faith that individuals can create change. On the other side, citizens must be aware of their rights and know what corruption entails. Jointly with UNESCO International Institute for Education Planning we’ve developed the first corruption risk assessment in education sector and found out that there is an imminent need for anti-corruption education modules in schools. This initiative has been endorsed by the Ministry of Education and the new curricula to be implemented from January 2017 will include topics on how corruption manifests itself and its negative impacts on society.

* References to Kosovo on this website shall be understood to be in the context of Security Council Resolution 1244 (1999).