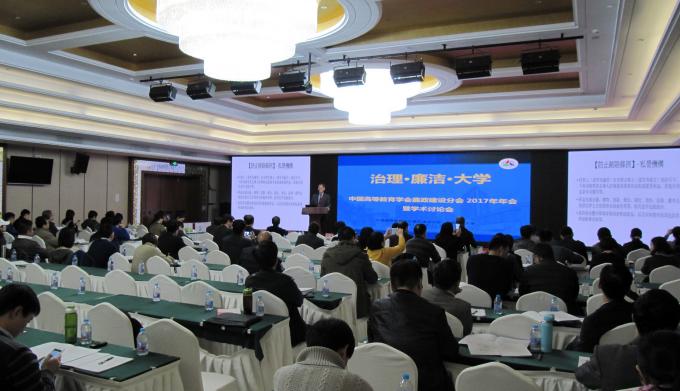 Forum on academic integrity at the higher education level

At the invitation of the Communication University of China (CUC), IIEP delivered a series of lectures on fighting corruption in education on the CUC campus in Beijing, and participated in a forum on academic integrity attended by 100 Chinese universities.

The Communication University of China (CUC) is one of the key Chinese universities participating in “Project 211” administered by the Ministry of Education. This project aims to raise research standards at the country’s high-level universities and promote strategies toward socio-economic development. CUC is made up of six faculties, and hosts approximately 14,000 students.

Following the signing of a Memorandum of Understanding in 2016, CUC invited IIEP to teach on the topic on ethics and corruption in education in November this year. Muriel Poisson, Task Manager of IIEP’s programme on Ethics and corruption in education, addressed students and academic staff, as well as researchers from several faculties and disciplines of the University, on a variety of issues related to transparency and accountability in education, highlighting lessons drawn from experiences around the globe. More specifically, she gave a series of lectures dealing with the following topics:

These lectures were followed by a forum devoted to academic integrity at the higher education level, organised by CUC from November 25-26. This forum was attended by more than 160 university staff from 100 universities located in all provinces of China. Ms Poisson delivered a keynote speech on the issue of “Academic integrity at the higher education level: an international perspective”, which was followed by active exchanges with the audience.

Presentations dealt with several domains of corruption affecting the Chinese education system, including school and university funding, infrastructure, admissions, and the selection and funding of research projects. Discussions highlighted the strong emphasis placed by Chinese authorities on the rule of law in the fight against corruption in education. The need to also pay attention to other strategies aimed at providing adequate incentives to change individual behavior was highlighted in this context. It was also suggested that such issues should be better documented though inter-disciplinary research with an emphasis on analysing facts, conducting perception surveys, and capturing the experience of individuals.