Gbagba: a multi-media ‘revolution from below’ teaching children about corruption

is a Liberian academic, activist and author with more than 15 years of professional experience in Africa, Europe and North America. 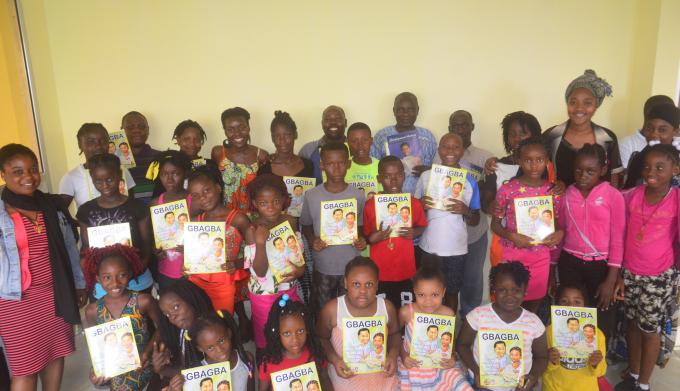 Robtel poses with Flomo Theatre trainers and the all-child cast of Gbagba: The Stage Play after a rehearsal in Monrovia, Liberia. Photo credit: Kreative Mindz Inc.

“Police officer, what does the Liberian government need to do to encourage you to stop taking bribes?”, said a young girl from a packed audience at Monrovia City Hall Theatre in Liberia’s capital. Dressed in black and white uniform with her school’s signature red beret, the student held a microphone tightly pressed under her mouth.

“Increase my salary!”, shouted back a diminutive child actor from the stage. Although not the exact replica of the Liberia National Police uniform, his green and black costume revealed wisdom beyond his years.

This was forum theatre at its best, following the September 28, 2017 debut of the stage adaptation of my anti-corruption children’s book, Gbagba. When audience members queried the all-child cast of 25 Liberian actors aged 8 to 12, they responded—unscripted—in character.

So, the young actor’s retort that the Liberian government needed to increase his salary to halt bribe-taking was a direct consequence of the five-month theatre training he had received in the socio-economic and political implications of corruption. When children begin talking about how corruption affects their every day lived realities, adults tend to listen.

And they have in Liberia.

Through two generous grants from the Open Society Initiative for West Africa (OSIWA), I have embarked on a multi-media ‘revolution from below’ bringing Gbagba to children (and adults) in the medium that suits them best. In addition to piloting the book in close to 30 schools across Liberia, I have also collaborated with the country’s premier artists to expand Gbagba’s reach beyond the written narrative.

For instance, Flomo Theatre catapulted the book onto stage as well as packaged it into a five-minute radio drama now airing on 64 community and commercial radio stations in Liberia. Similarly, the book has been adapted into a song, “Gbagba Is Corruption”, written and produced by number one Hip-Co musician, Takun J. It now joins the canon of anti-corruption songs popularised by politically conscious musicians who blend Liberian colloquialisms with Hip-hop beats.

Illustrated beautifully by Liberian visual artist Chase Walker and released to critical acclaim in 2013 by Liberian niche publisher One Moore Book, Gbagba is my attempt at giving children the verbal tools to question the confusing ethical codes of the adults around them. The book explores issues of accountability and integrity through the narrative lens of 8-year-old Liberian twin protagonists Sundaymah and Sundaygar, who leave their hometown of Buchanan to visit their aunt and uncle in Monrovia.

The twins encounter and wrestle with everyday forms of corruption or Gbagbo—loosely translated as trickery in the Bassa language—in places as varied as traffic jams, schools, churches and (super)markets. Gbagba particularly challenges the mainstream notion that corruption is a monopoly of the powerful, particularly those in the public and private sectors.

In Liberia, my country of birth, the word ‘corruption’ has become a political dagger that we hurl at those with ‘entrusted power.’ It is meant to shame and alienate the accused, thereby exonerating the accuser from any personal responsibility. But, I think of corruption as the big and small acts of trickery that all of us engage in as a means of bypassing systems that we find cumbersome or problematic. For me, Gbagbo (corruption) is a function of both greed and poverty.

I have often been asked why I target children. Adults are too set in their ways and I got frustrated with us rationalising our dubious deeds. Children tell it like it is. They have oodles of integrity. They are refreshingly truthful until we socialise them to be otherwise. I wanted to stop that socialisation process in its tracks by initiating meaningful conversations with kids about the blurred lines between honesty and dishonesty.

Through Gbagba, I hope to build a movement of children who question corruption—resist it, even—and embarrass adults into living more authentic, ethical lives. In Africa, we have folktales that teach children about virtues and vices.  Now, we can add Gbagba and its forthcoming sequel to that amazing canon, formally and informally.

In 2015, the Liberian Ministry of Education in Liberia placed Gbagba on the supplemental list of readers for 3rd to 5th graders, bringing the story into classrooms across the country. With its broad appeal as a Pan-African and universal children’s narrative, Gbagba was also adopted as a supplemental reader for Primary 3 by the Ghana Education Service and is currently under review by ministries of education/education boards in Rwanda, Burkina Faso, Niger and Cameroon. I have also conducted Gbagba workshops for children in Liberia, Côte d’Ivoire, Mozambique, Jamaica and the UK.

It is my hope that the book and its multi-media tools will generate meaningful conversations amongst children and adults across Africa and further afield about how to be accountable to self, community, nation, continent and globe. This will contribute to minimising Gbagbo, now and in future generations to come.

For more information about Gbagba, visit the author's website.