is currently an assistant professor of public policy at the Doha Institute for Graduate Studies.* 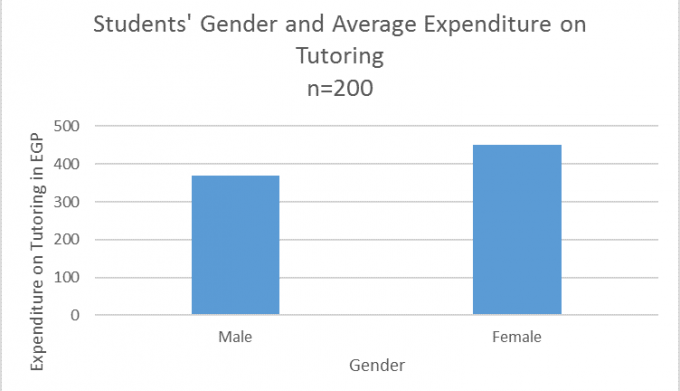 Over the years, public education in Egypt changed from being a free service to a commodity (Hartmann, 2008), which contributed to the expansion of private tutoring. Private tutoring in Egypt is not limited to pre-university education, it is also prevalent at the higher education level (Sobhy, 2012). Tutoring has grown significantly over the past twenty years: in 1996, the total expenditure on private tutoring studies was estimated at around EGP 7 billion (Sayed, 2006), and by 2009 Sobhy (2012) estimated expenditure to be between 12 and 15 billion EGP.

The focus of tutoring in Egypt is solely on preparing students for the end of year final exams (Sayed, 2006). An average secondary student enrolled in a public school receives tutoring in 5 subjects, and spends at least 10 hours per week in private lessons. The predominant subjects for tutoring are Arabic, English, French, Mathematics, Physics, Chemistry, and History. Private tutoring creates a significant financial burden on Egyptian families, which undermines and negates the concept of free equitable public education (Sobhy, 2012).

In my PhD research, I analyzed private tutoring in public general secondary education using a “principal-agent-client framework”, which focuses on agent-client dynamics. In my analysis, I tried to address the following questions: 1. How does private tutoring vary across local contexts? 2. How are agent-client dynamics correlated with the amounts spent on private tutoring? To answer these questions, I visited 20 schools in two Egyptian governorates, namely Cairo and Assiut where I surveyed 550 respondents (including students, teachers and parents), conducted 30 semi-structured interviews, 4 focus groups and school observations.

96.7 percent of the interviewees reported that they participate in the phenomenon of private tutoring.

As expected, families with higher income pay more for private tutoring, as they hire tutors who are better educated and thus more expensive, and as their children are tutored in more subjects (in some cases, children can be tutored by more than one teacher for the same subject). As declared by one interviewee, “I do not mind spending on tutoring as long as I can afford it and the amount spent does not negatively affect the family's quality of living. But once it starts affecting (our quality of life), expenditure on tutoring has to be reduced”. Parents with higher levels of education and urban residents also pay more for private tutoring. From a gender perspective, female students spend more on private tutoring than their male classmates; and female teachers charge students slightly more than their male colleagues.

When looking at the power and control dynamics between agents (teachers) and clients (students and parents), it turns out that none of these groups has ultimate power over the tutoring phenomenon. This does not mean that each actor has equal power within the process. For example ‘celebrity teachers’, of whom there are few, are able to select their students: in some cases, students are required to sit for an admissions exam and to book their seat a year in advance. Such teachers control and manage the dynamics with the clients; they impose their set of rules and charge as much as they want. In the case of ‘normal average teachers’, however, clients control the dynamics, which allows them to pay less. This is illustrated by the following quote from a ‘celebrity teacher’: “When I was a young unknown teacher, teaching in a rural setting, parents used to bargain with me over my little fee. Now that I have become a celebrity teacher, I choose my students, I set my price and students and their parents happily pay my high fee”.

In conclusion, although private tutoring is illegal under Egyptian law, agents and clients actively participate in it due to the relatively low risk of law enforcement compared to high individual gain for all actors involved. Moreover, 87% of the interviewees declared that even though illegal, private tutoring has become a social norm. One teacher thus stated: “Private tutoring is a mild form of corruption, and since corruption has become a social norm in Egyptian society, why would the educational sector be any different?”. To fight against private tutoring, political will is required to ensure that the rule of law is enforced. Better teacher training opportunities and higher salaries also need to be considered. Finally promoting critical thinking through curricula reform would constitute a major way forward.

Sobhy, H. (2012).Education and the Production of Citizenship in the Late Mubarak Era: Privatization, Discipline and the Construction of the Nation in Egyptian Secondary Schools. PhD dissertation SOAS.

*Ahmed Fayed earned his PhD from King’s College London where he researched corruption in education in Egypt. Fayed taught and conducted research at King’s College London, the American University in Cairo, Doha Institute for Graduate Studies and Future University in Egypt. Fayed’s research focuses on corruption, education policies, and local governance across the Middle East with a focus on Egypt.