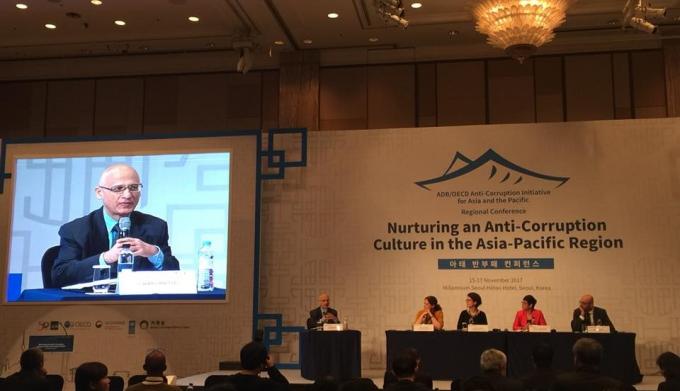 From 15 to 17 November 2017, IIEP participated in the Ninth Regional Conference of the ADB/OECD Anti-Corruption Initiative for Asia and the Pacific, which took place in Seoul, Republic of Korea.

This Initiative was established in 1998 “for countries from the Asia-Pacific region to work together in their anti-corruption efforts”. Since then, the Initiative has served as a forum for anti-corruption agencies in the region to exchange practices and experiences. The Seoul Conference was devoted to the theme: “Nurturing an Anti-Corruption Culture in the Asia-Pacific Region”.

IIEP participated in a panel session organized as part of the Conference on “Mainstreaming a culture of integrity for youth: how can we influence the attitude and behaviour of the next generation?” . The objective of this session was to review the use of civic awareness-raising initiatives and the school system as a platform to educate citizens about integrity and anti-corruption - either through the core curriculum or through extra-curricular courses offered by Anti-Corruption Agencies. Case studies were used to explore results achieved as well as remaining challenges. In addition to IIEP, panellists included representatives from OECD, Integrity Action, and Toward Transparency Vietnam.

Muriel Poisson, Task Manager of IIEP’s programme on Ethics and corruption in education, highlighted in her presentation that “Corruption in education teaches the younger generation that corrupt behavior is acceptable” and she raised the question: “How can integrity be taught in an environment which is itself corrupt? ”. In this context, she called the audience to pay stronger attention to the design and implementation of effective policies and measures to assess and address corrupt practices within the education sector.

Panel presentations were followed by active interactions with the floor. Participants agreed on the need to promote sectoral approaches in the fight against corruption – particularly as regards the education sector. This point was reinforced during the discussions related to the future activities to be prioritized under the Public Integrity Network on Effective Anti-Corruption and Integrity Policies in future years, which has been recently established as part of the ADB/OECD Anti-Corruption Initiative.