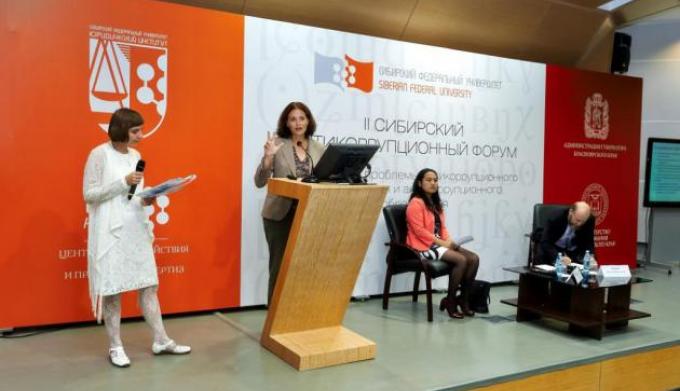 Muriel Poisson, head of the Research and Development Team at IIEP, was invited to participate in the second Siberian Anti-Corruption Forum devoted to the design and implementation of anti-corruption training for civil servants.

High-level representatives both from the province and from the city of Krasnoyarsk attended the forum, as well as elected members of the provincial assembly and leaders of the anti-corruption center established within the Federal University of Siberia. Also present were lawyers, civil society representatives, and public and private media – about 200 people altogether.

Ms Poisson gave two lectures. The first focused on examples of anti-corruption training programs developed in the health, education and business sectors, and the second on anti-corruption training programs targeted at education ministry officials and teachers. She emphasized the importance of using practical case studies to ensure proper understanding and the engagement of participants. She argued that transparency and accountability also need to be built into staff management procedures. Throughout her presentations, she used examples from countries that have experimented with such approaches such as Bulgaria and Hungary.

I was particularly pleased to see that participants are well-acquainted with our work. Muriel Poisson

Some have made intensive use of IIEP publications such as “Corrupt Schools, Corrupt Universities: What can be done?” to design their own training manuals and guidelines.

IIEP looks forward to continuing its cooperation with the Siberian Federal University and the province of Krasnoyarsk, for example, by conducting joint research activities in the area.