This case study focuses on the participatory school budgets (PSB) implemented since 2017at the initiative of the Portuguese Ministry of Education. 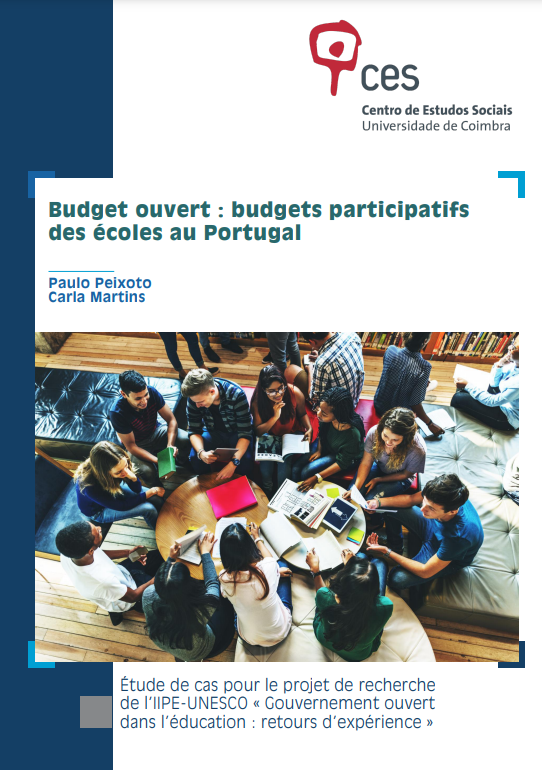 Based on a sample of nearly 300 respondents, this study shows that GHP is considered very relevant by the actors it directly involves. It enables projects to be carried out in a variety of areas, including the design of outdoor spaces, indoor and outdoor furniture, as well as leisure facilities, spaces and activities. Parents and members of parents' associations, who are less directly involved in the programme, express a more nuanced opinion, as well as a certain frustration at not being more involved in school life.

Interviews in the five main regions of mainland Portugal with school headmasters, members of school management committees, members of parents' associations, teachers and pupils, show the success of this initiative in spreading a participatory culture in schools. Although it does not involve participation in major school decisions, it does strengthen the role of students in decision-making processes, as well as their sense of ownership and accountability to the school community.

Children must have an active voice in management decisions and in the development of projects aimed at transforming the school reality.

Among the objectives of the GHP, the motivation of the pupils appears to be the main criterion for the success of the initiative. Indeed, the great merit of the GHP is that it encourages better integration of the pupils as well as increased motivation and involvement. Beyond that, the GHP benefits the entire school community: the interviewees report greater confidence in the proper use of school resources, in the adequacy of decisions taken in relation to the real needs of the school, and in their own ability to introduce changes within the education system. The positive impact thus goes far beyond the strict implementation of the budget allocation proposals and their concrete outcomes: it contributes to a culture of participation towards a more inclusive school.

To share these recommendations and discuss the main findings of the study with stakeholders - including researchers, policy makers, civil servants and civil society representatives - the IIEP organised a launch webinar with the Centre for Social Studies of the University of Coimbra on 29 November 2022. Watch the video of this event. Download the brochure in French.

Paulo Peixoto is a sociologist by training. Professor at the University of Coimbra, he coordinates the Observatory of Education and Training Policies at the Centre for Social Studies.

Carla Martins is a geography teacher in secondary education. She has worked in several schools in central and northern Portugal.

This is one of six case studies of open government initiatives commissioned by IIEP and also conducted in Colombia, Ukraine, India, Madagascar and Peru. It is part of the IIEP's overall research project "Open Government: Lessons Learned".