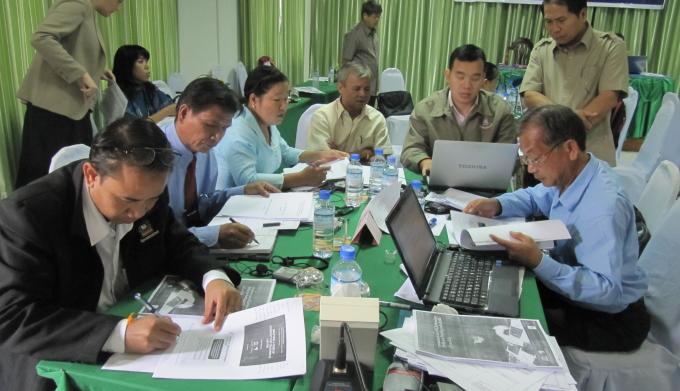 Lao People’s Democratic Republic moved quickly on the development of a national code of conduct for its eight categories of teachers. Launched in mid-2012, the project now enters its final stage: a draft code is ready to be sent for comments to relevant stakeholders, and will then be piloted in a few schools, before being finalized in 2013.

A Code Drafting committee – composed of representatives from the Ministry of Education and Sports (MoES), teacher training colleges, and teachers – met in Thalat, from 26 February to 1 March 2013, to write its content. The Committee based its work on the results of two large consultation meetings organized in June 2012 and February 2013 with the support of IIEP. The Institute guided the members of the Code Drafting committee in the writing of the different components of the code and commented on their initial draft. Members in the Committee made good use of the IIEP’s Guidelines on teacher codes of conduct all along the way.

In concluding the meeting, the Director-General of the Department of Teacher Education set very clear orientations for the future stages of the code. He further expressed his pride that Lao PDR was able to learn from international experience and develop its own code reflecting the country’s values. He hoped that other sectors in Lao PDR would learn from the innovative and successful process set in place by the education sector to develop their own codes of conduct.

This successful process benefited from the financial support of the Capacity Development for Education for All (CapEFA) programme for Lao PDR, and was organized by UNESCO Bangkok in collaboration with MoES.